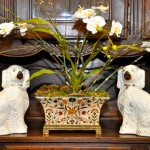 These little ceramic doggies are fashioned after the Cavalier King Charles Spaniel. (Photos by Keith McCoy)

Those adorable little pottery dogs aren’t the only home decor objects that carry the name “Staffordshire.”

You can also find lions and tigers and bears! Oh, my!

And let’s not forget about figures of lords and ladies in a variety of lord and lady poses.

Staffordshire dogs are among the most popular. Fashioned after the royal Cavalier King Charles Spaniel (yes, King Charles of England loved the little dogs), the fired clay figures have been around since the 18th century — often by farmers trying to supplement their income.

Like the spaniels, the Staffordshire version comes in a variety of colors.

The Staffordshire part of the name reflects the area of England where the pottery was made. Six towns in the middle region of the country — Burslem, Fenton, Hanley, Longton, Stoke, and Tunstall — were best known for producing tableware as well as decorative objects from the abundant clay found in the region. (An interesting aside: The term “pot hole” comes from the practice of these early potters digging up roads for the clay. The roads had been cleared of brush, so it was an easier way to get the clay.)

The Victorians especially loved the dogs and other Staffordshire figures. In fact, most of the antique Staffordshire we get today is from the 1840’s through the 1890’s. Reproductions also are abundant, but it’s nice to know that collectors still can find really nice pieces from the 19th century.

Staffordshire pottery comes in a variety of subject matter. On the right is a depiction of Little Red Riding Hood; the others are of courtly figures.

At Clark Antiques Gallery, you’ll find a variety of Staffordshire pottery: The dogs (of course), a pair of lions, and several courtly figures.

This pair of lions is just as adorable as the dogs but much harder to find.